Fried green tomatoes… Fried tomatoes? What is it with us and our obsession to fry everything?

Because it’s delicious, thats why!

I had no idea what fried green tomatoes were and did not feel like branching out to try a fried vegetable, or fruit, depending on who you talk to. So, I researched what and how this certain dish was invented and low and behold from the south, go figure right? Actually, no.  According to Robert F. Moss, a food historian and writer for the South Carolina local newspaper, he believes that “they entered the American culinary scene in the Northeast and Midwest, perhaps with a link to Jewish immigrants, and from there moved onto the menu of the home-economics school of cooking teachers who flourished in the United States in the early-to-mid 20th century.”  You’ve got to be kidding!  Fried Green Tomatoes are Jewish?  Moss backed up his claim by finding fried green tomato recipes in several Jewish and Midwestern cookbooks dating from the late 1800s.  Meanwhile, he found nothing in Southern cookbooks and hardly any in Southern newspapers.  It appears that the link to the south is from that single 1991 movie and little else!  Of course this makes all kinds of sense.  In the north, where the growing season is short and where a dip in temperature means having to find something to do with unripe tomatoes before frost kills them, why wouldn’t someone have invented the Fried Green Tomato?

So, the idea intrigued me and I decided to venture out to create my own little recipe, to see how good these might actually be.

Since I live in the city and do not have a beautiful garden in my backyard, I went to the grocery store.

As I was browsing through the produce isles, I did not find a designated spot for “green tomatoes.” I asked an employee if they had any green tomatoes. The employee looked at me as if I was crazy. “Lady, who wants to buy un-ripe tomatoes, are you crazy?” I was pretty disappointed, because how do you get ahold of unripe tomatoes, unless they are in your own garden? 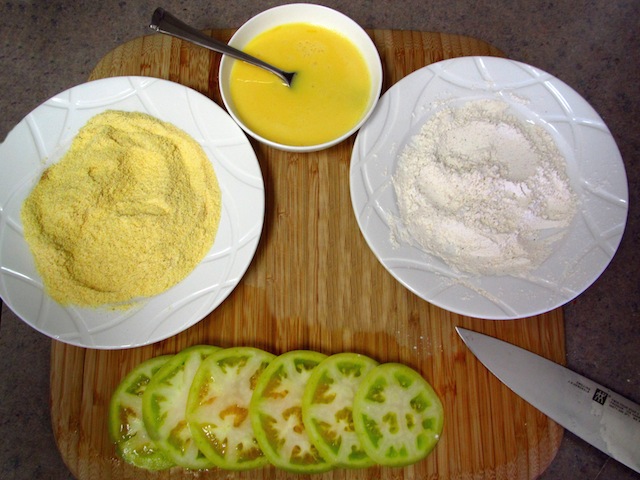 Then I had an idea! I saw some tomatoes on the vine and some were very green. I decided to go through the basket and rummage through to pick out all the super unripe tomatoes I could get. After all, I am doing everyone a favor right? 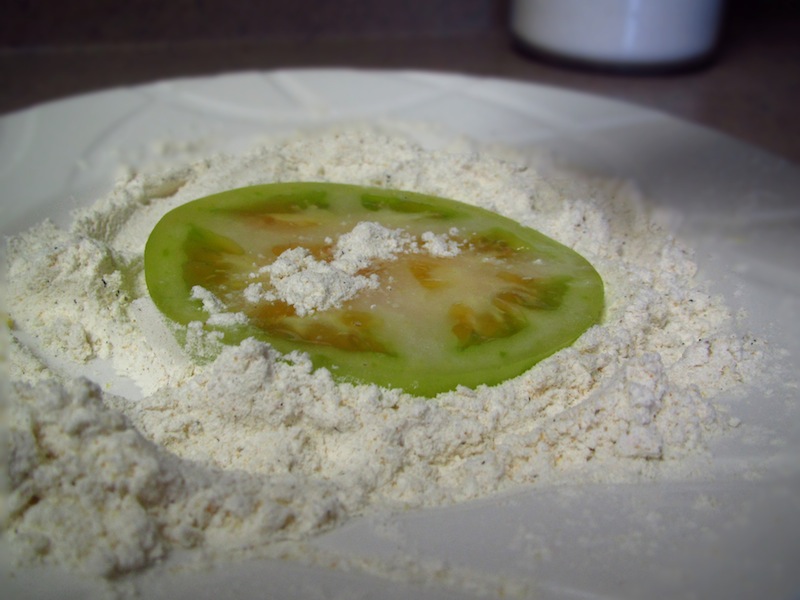 I may have ruined the whole “pretty tomatoes on the vine” look and might have had people give me some looks, but oh well! I was on a mission and doing everyone a favor! 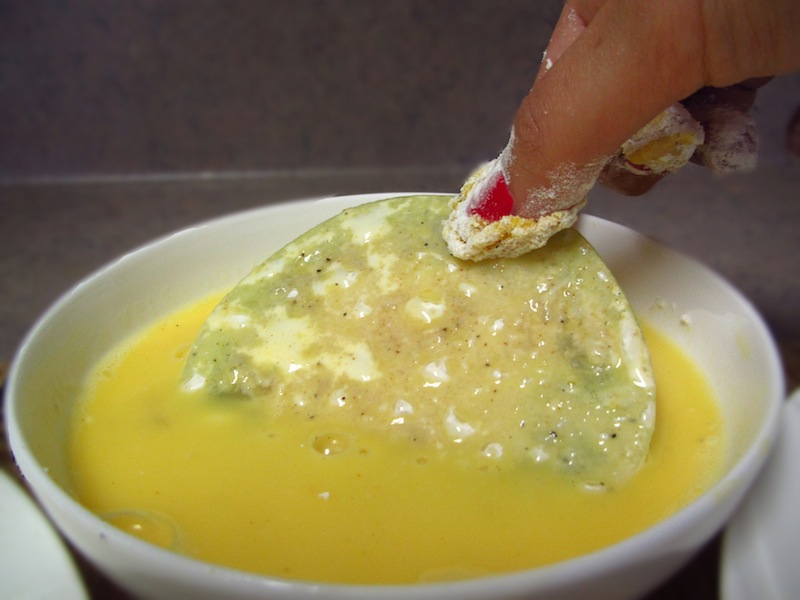 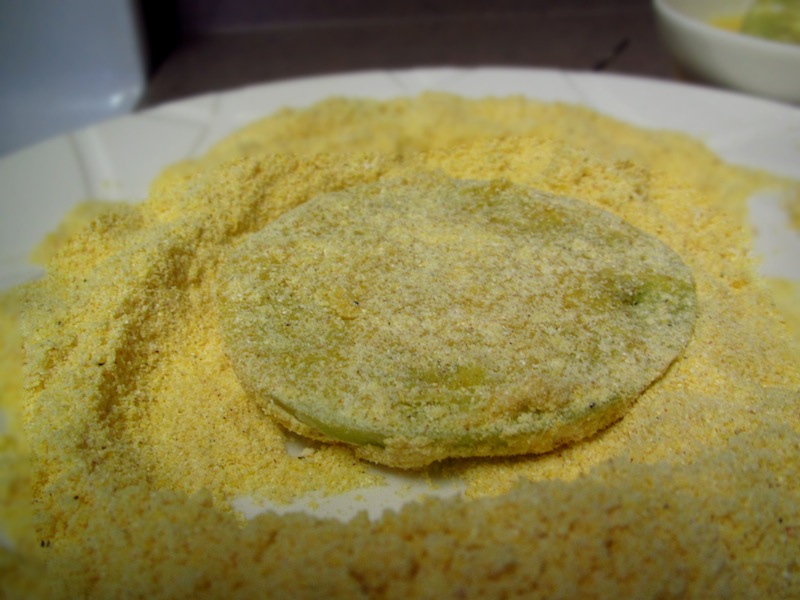 *Tip: A trick to keep the batter from not falling off, is to let the tomato slices soak up the flour on both sides, then sit in the egg/milk bath so that more corn meal could stick to the tomato. Don’t be afraid to press the corn meal on the tomato slices after the egg bath. You want as much corn meal stuck on the slices as possible before dropping into the pan. 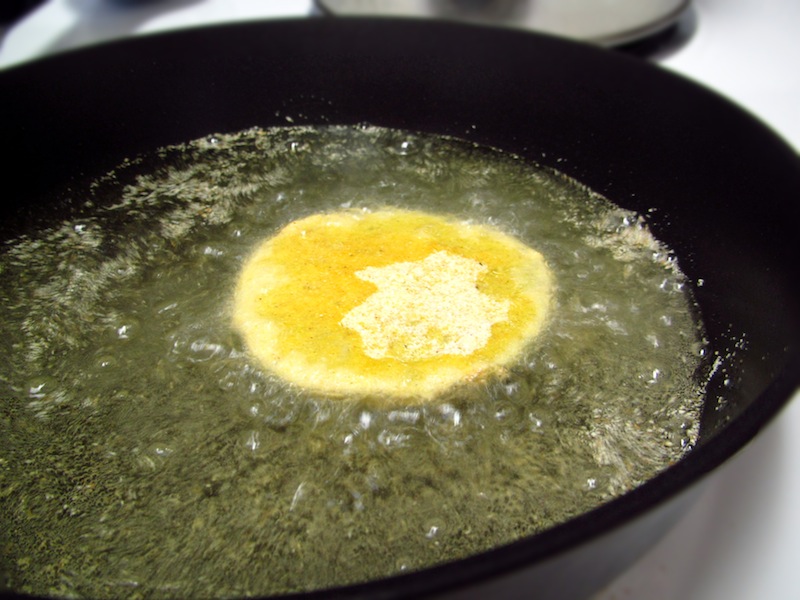 If you don’t have enough crust on the tomato slices, the juices from the tomato might seep through and cause the grease to pop in your face. Trust me when I say it doesn’t feel good. 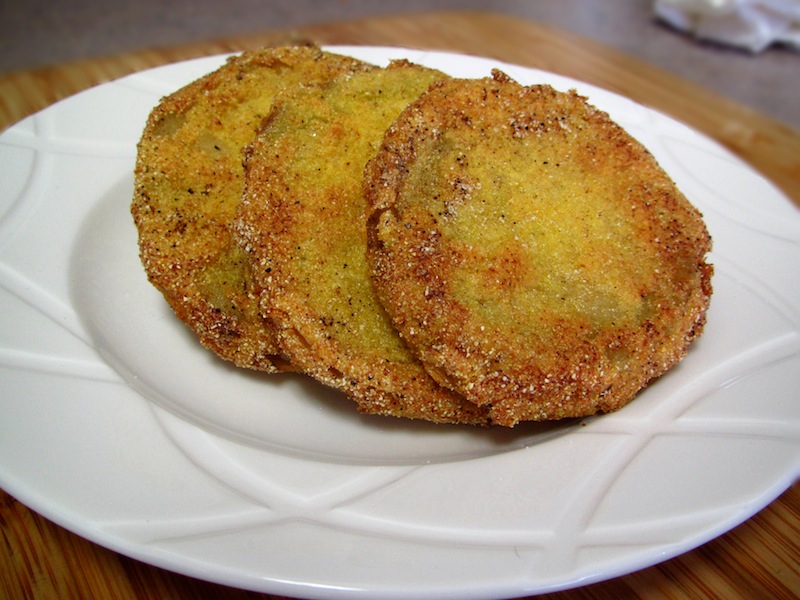 When you fry the tomato slices, you should fry no more than two or three at a time, and only 1 1/2 minutes on each side. Giving it that beautiful golden brown and crunchy texture.

If you want, you can enjoy the fried green tomatoes with hot sauce, but I like being a little more adventurous.

So, I decided to make a jalapeño cilantro sauce, to intensify the flavors of the un-rip and fried tomato. 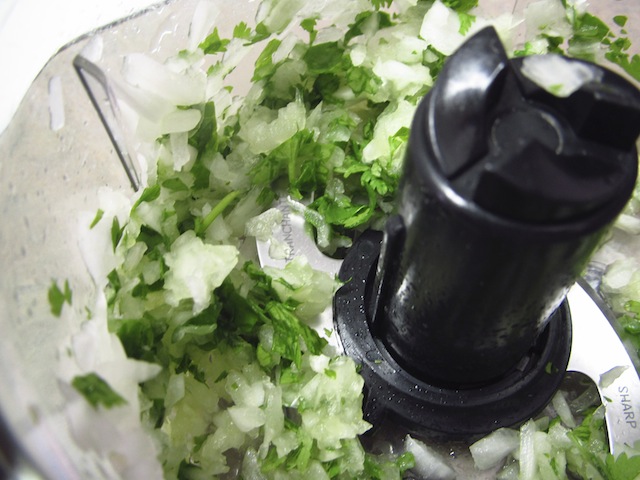 **Tip: If you deseed and  devein the jalapeño, it will not be spicy. Instead, the jalapeño gives you that fresh and delicious peppery flavor without the spice.

Fried green tomatoes can be eaten any way. As a side, appetizer, or for a tapas style dinner.

In the photo above, I made the fried green tomatoes for a tapas style dinner and they were a hit with the jalapeño cilantro sauce.

Place flour, 1/2 tablespoon garlic powder, 1/2 teaspoon salt and 1/4 teaspoon pepper in a shallow dish. In another shallow dish, beat eggs with the milk. In another dish, mix corn meal, 1/2 tablespoon garlic powder, cayenne, paprika, 1/2 teaspoon salt and 1/4 teaspoon. Dredge tomatoes through the flour, then the eggs, and then through the corn meal. Add only a few pieces to the pan at a time, so they can cook evenly, about 1-2 minutes each side. Drain on paper towels and serve with jalapeño cilantro sauce.

In a food processor or blender, chop up the cilantro, jalapeño and onion. Add the avocado, sour cream and lime juice and blend. Add the paprika, garlic powder, tabasco and water. Season with salt and pepper to your liking. I prefer 1/2 teaspoon salt and 1/4 teaspoon pepper. Mix all together, transfer to a bowl and refrigerate for an hour.